14.01.18
Last night we played Waggle Dance, a game about bees. It's a worker placement game where the aim is to produce honey. Many, many agonising decisions and lots of fun. Giro won.
25.03.18
Games night reconvened after a couple of weeks off last night. It was a short one because of the clocks changing and various people having to be up really early on Sunday. We played Deep Sea Adventure, a little push your luck game about diving for treasure. In the first game, I ran out of oxygen every round and scored nothing but I won the second. Deep Sea Adventure is a lot of game in a tiny box and well worth getting even if you don't normally do this sort of thing. It plays with up to six.
We finished with a game of Port Royal. Another push your luck game with a pirate theme. I came last again of course but not egregiously. Both games were supplied by Giro but will be going into my collection too come payday.
As you can see from the fur, Felix joined us for the evening as is his custom.
01.04.18
Last night we played Escape the Dark Castle, a co-operative game which is essentially a 'choose your own adventure' gamebook in card form. It has a charmingly homemade look and a strong retro feel. Each character has custom dice which is a nice touch.
We managed to escape the castle, everybody surviving the final boss fight with a single hit point remaining.
We finished the evening off with some more Deep Sea Adventure. Karl won but it was very close. We've all learnt to only dive a little way down and not be greedy. I don't think anybody drowned this time out which is good but not as funny. I'm not sure why it's so hilarious to think of people gasping for air as they sink into the dark watery depths, but it is!
Felix joined in wholeheartedly the entire evening even rolling the occasional dice. 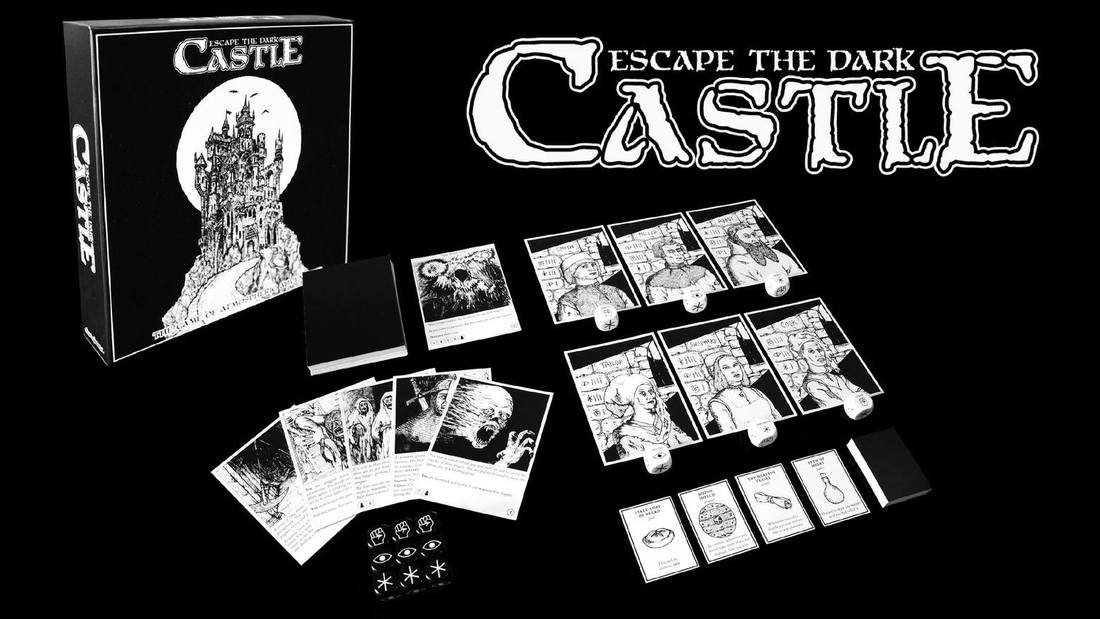 15.04.18
Last night was a short games session. Karl had to leave early and Michaela was working so didn't arrive until about half-past eleven. We played two games of Port Royal, neither of which I won despite having epic turns. Oh well, I was ganged up on; Sylvester helped Giro, Felix helped Mark and Tonkatsu stood in for Karl after he left. No one helped me at all :(
22.04.18
No Michaela again this week and Karl had to leave early so we broke out Port Royal again.
We had ice cream for the first time this year and Felix joined us to sit out the thunderstorm.
06.05.18
TransAtlantic again last night. A much higher scoring game than our first outing. Mark won by a good margin although I thought Giro's strategy of completely owning a port and stocking it with just his ships was going to succeed, it was frightening to behold in the early game as his points just kept mounting up.
I came third, must try harder.
TransAtlantic is one of Felix's favourite games too.
15.07.18
No Pirates roleplaying last night as Mark was away so we broke out Port Royal again and had a couple of games of this to keep the pirates flavour going until next week. I won the first and Michaela won the second.
Port Royale gives a lot of decision making and gameplay in a small box but is never too taxing or complicated so even non-gamers can understand and enjoy it straight away. 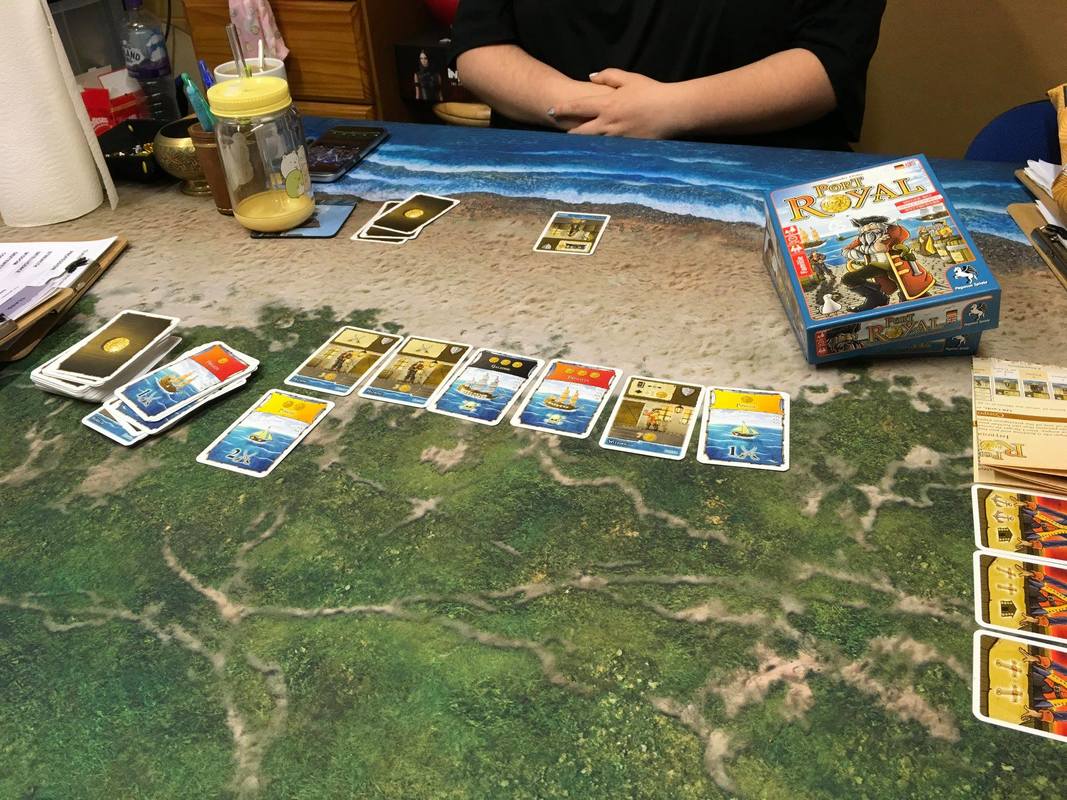 22.07.18
More Port Royal last night as we waited for Michaela to finish work so we could start on the role playing. A very close game saw Mark win with 13 points, I chased him unsuccessfully managing only 12. 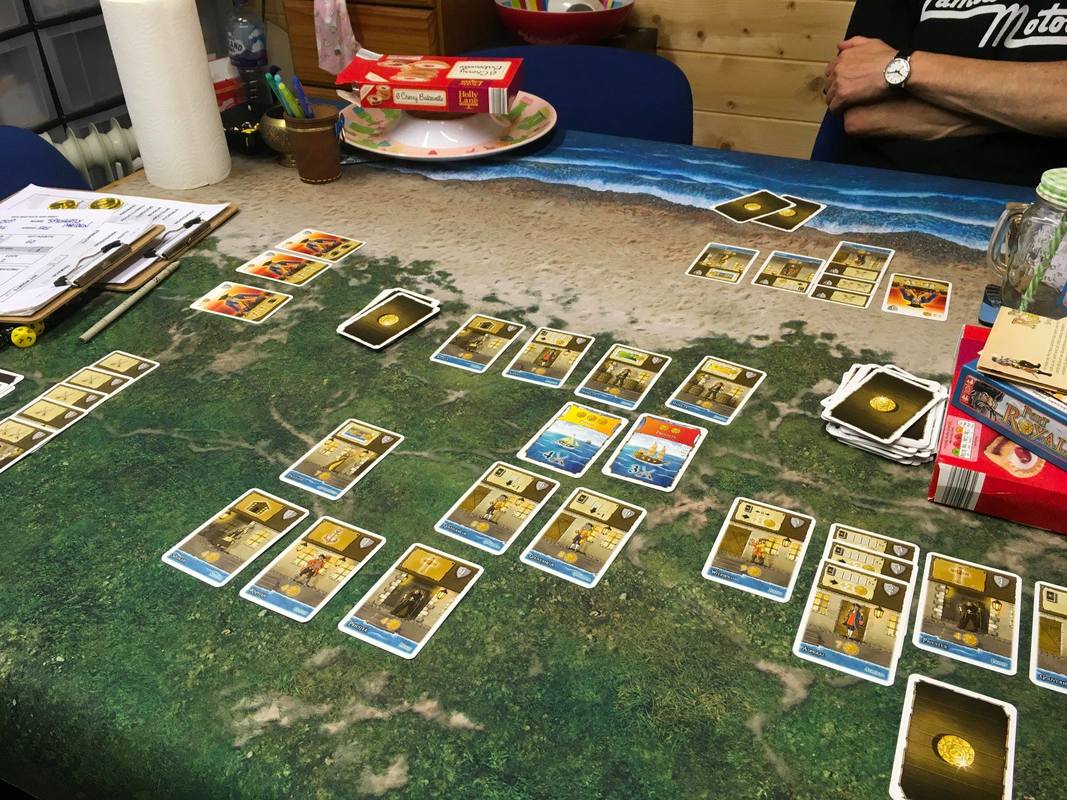 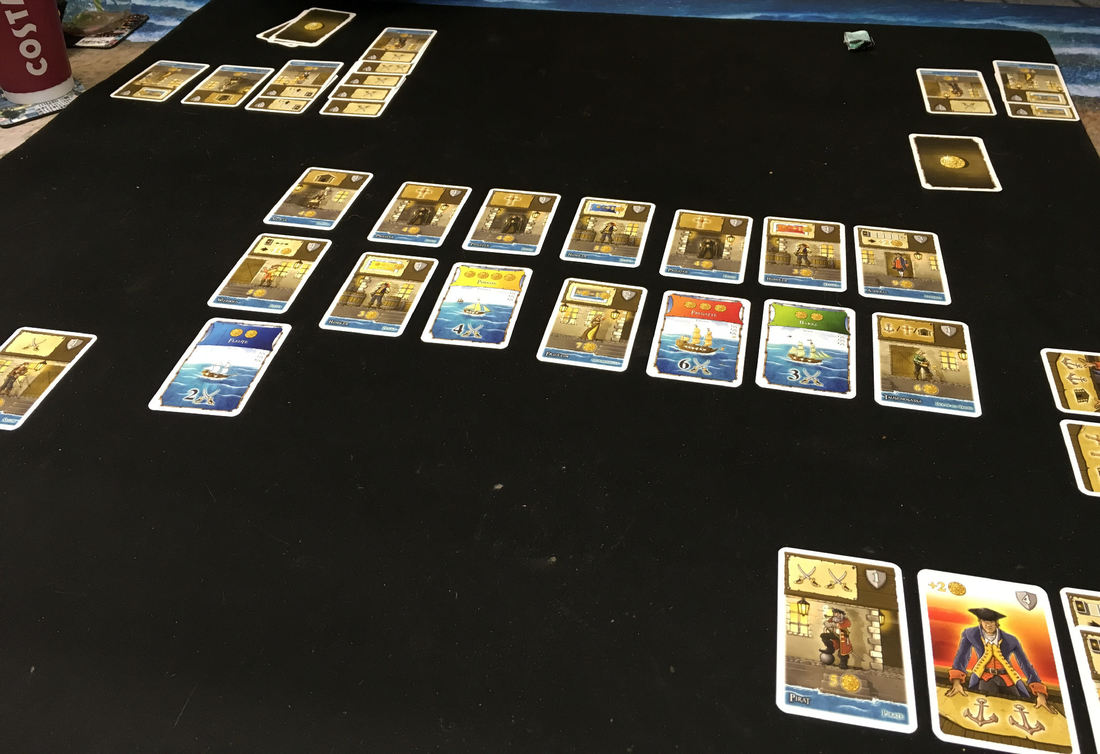 09.09.18
Last night was a very short session so we just played a single game of Port Royal which Giro won. 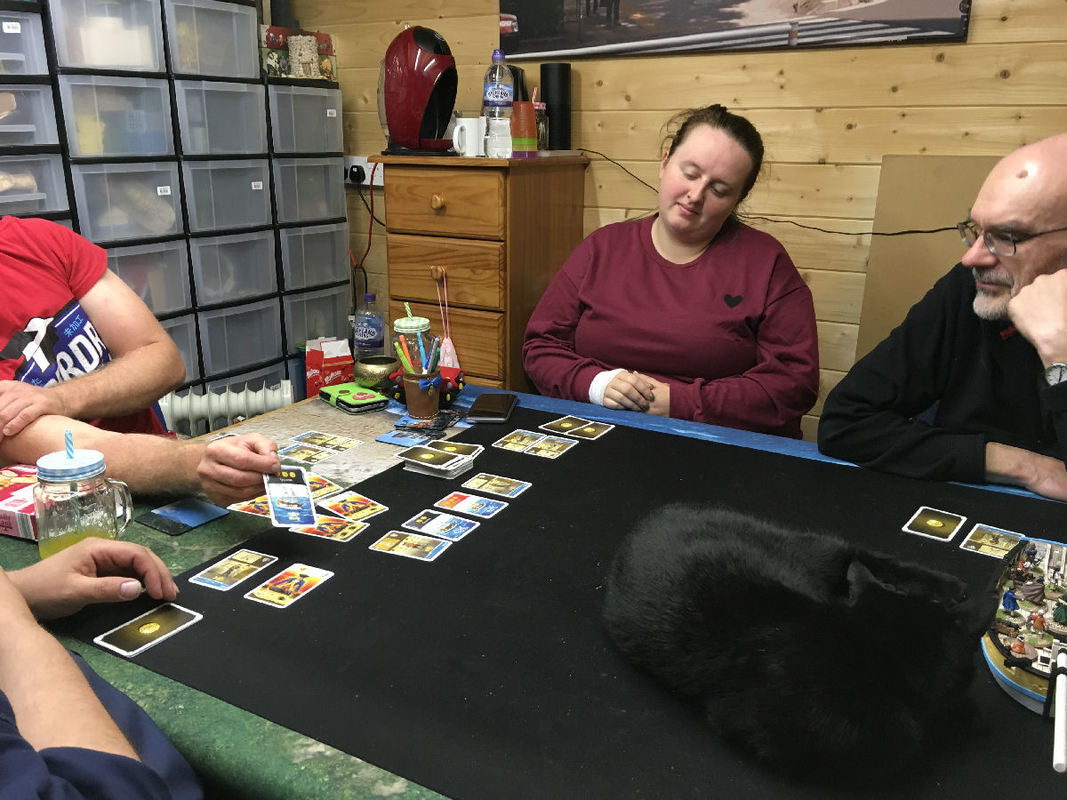 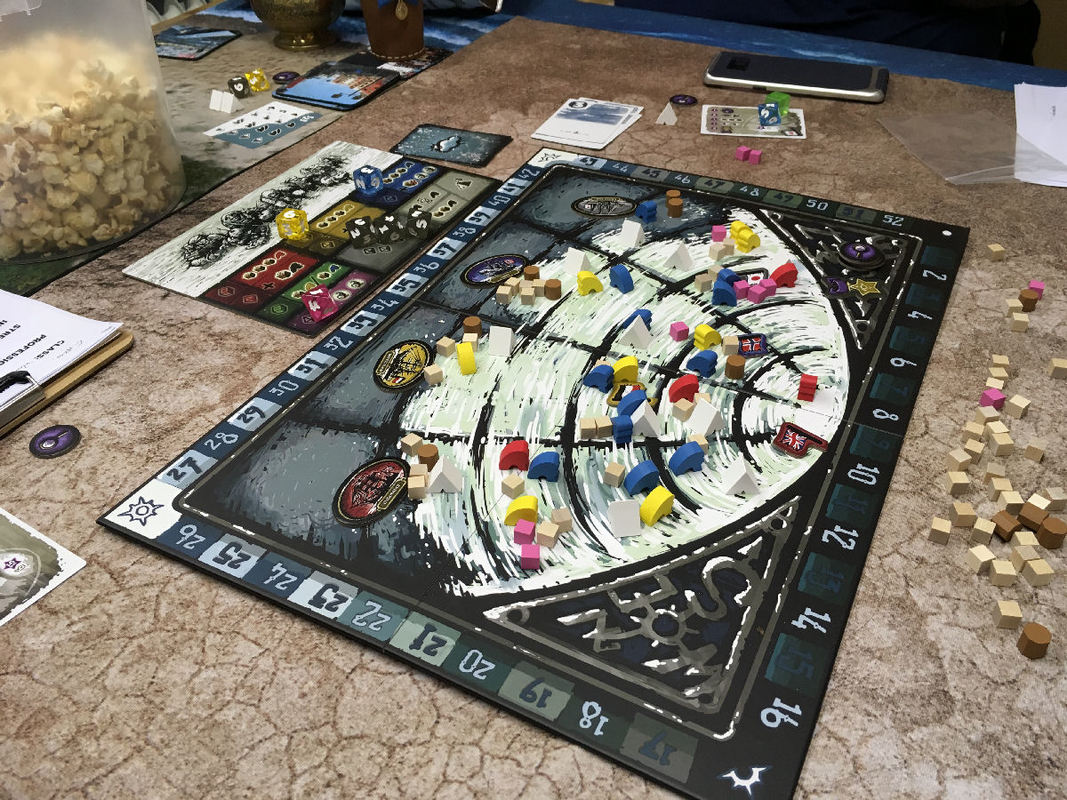 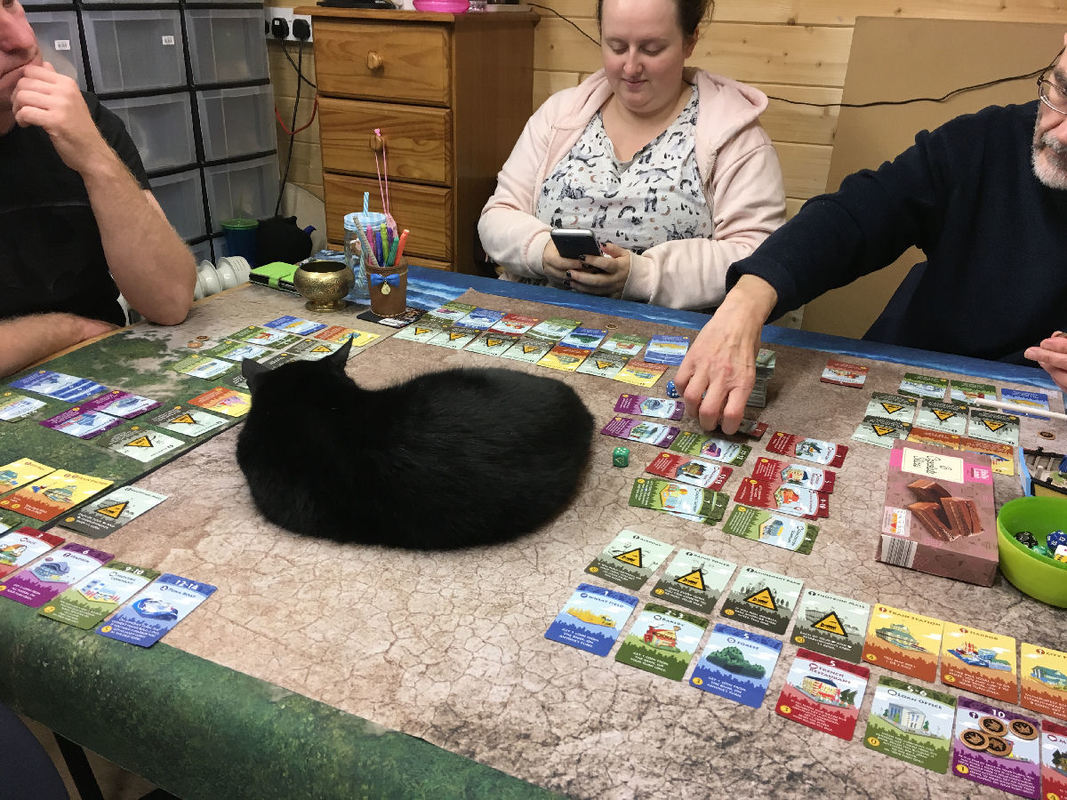 13.10.18
Back to Machi Koro with just the harbour expansion. Two fast games, Giro won both. He won the second game after getting an early lead with a vineyard! Felix was the banker again. 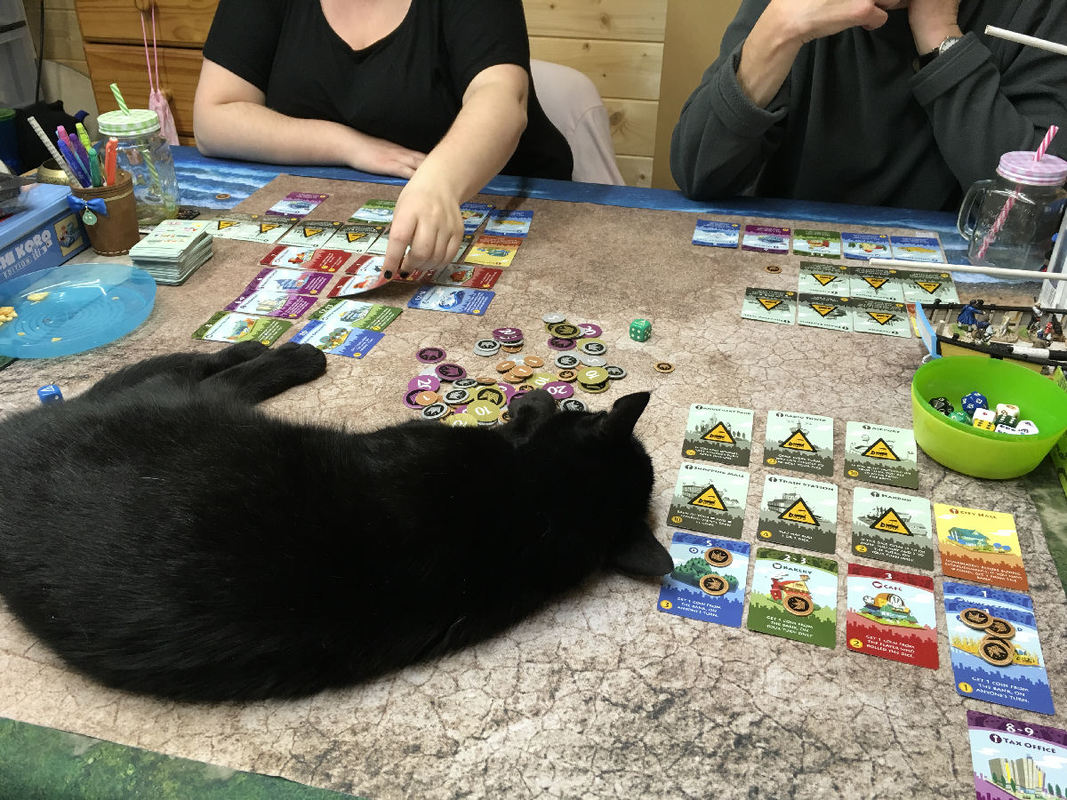 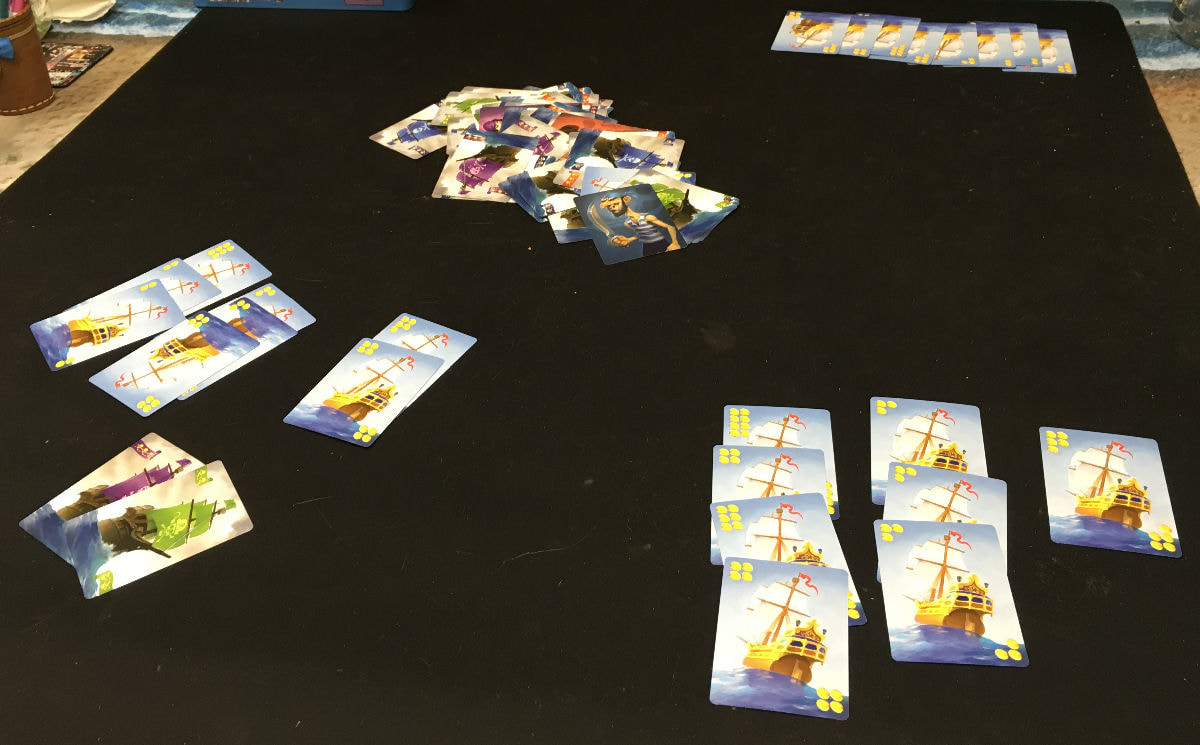 27.10.18
Michaela's away at a convention so playing Tales of the Northlands was postponed until she gets back. Instead, we played three games of Machi Koro last night which Giro won all three of. At least the last one was close- I was just pipped at the line. 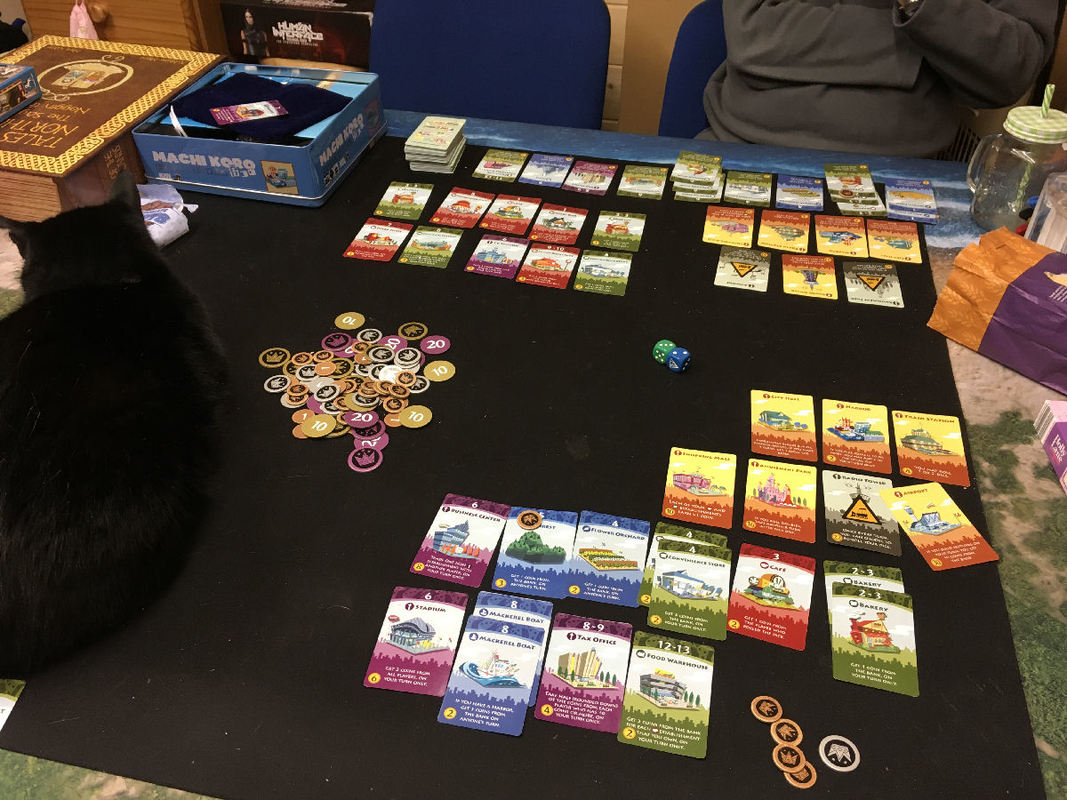 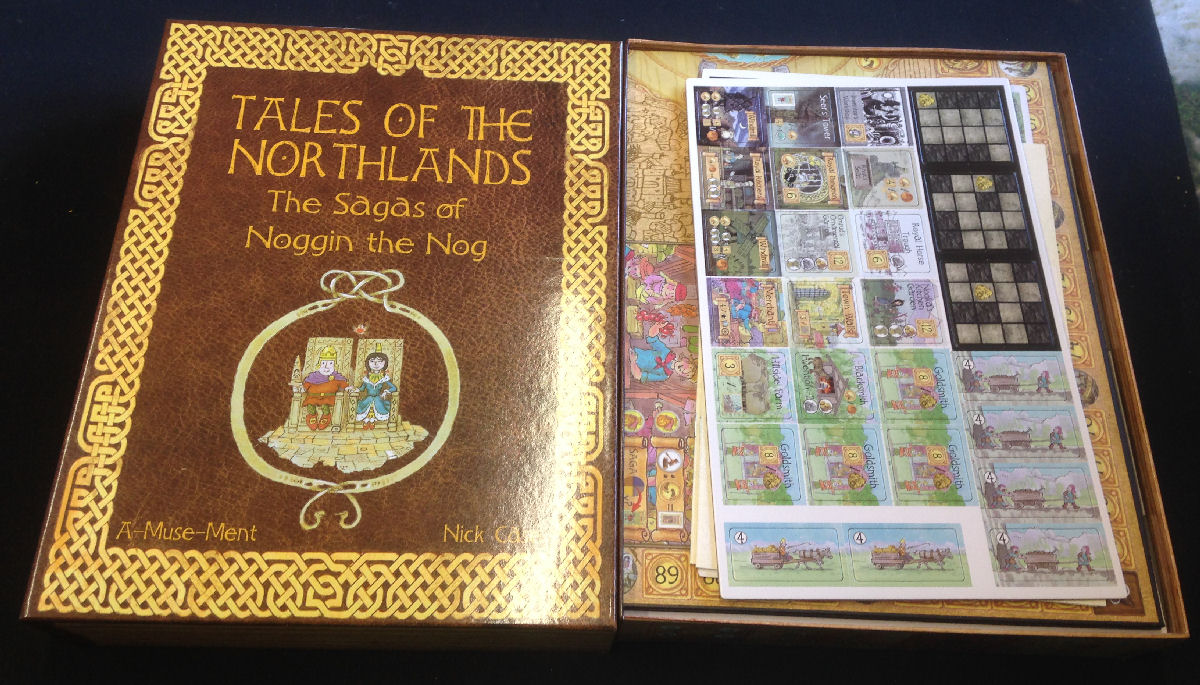 03.11.18
Last night I was too tired to tackle a first playthrough of a big Eurogame and Michaela was going to leave early to be ready for work tomorrow so we reverted to Machi Koro again. Mark won which broke Giro's winning streak. 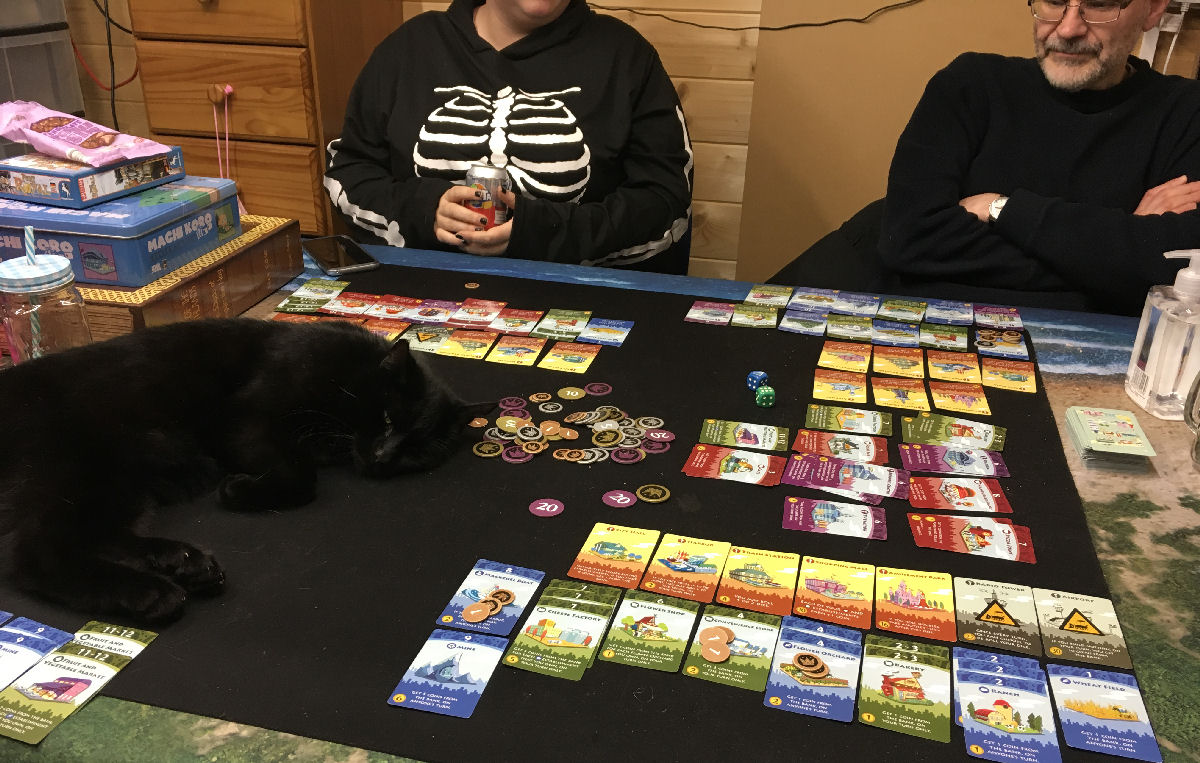 25.11.18
Last night's games night was a subdued affair. Michael's in Japan and Karl was doing something else so we played a three-player Go Nuts For Donuts. I came second in both and Mark and Giro won one each. It's a lot less stressful as a three-player game which perhaps makes it a little less enjoyable. Still fun though! Sadly, because it was only a three-player game I couldn't include my newly purchased zombie donut cards which are for four players and up. Next time! 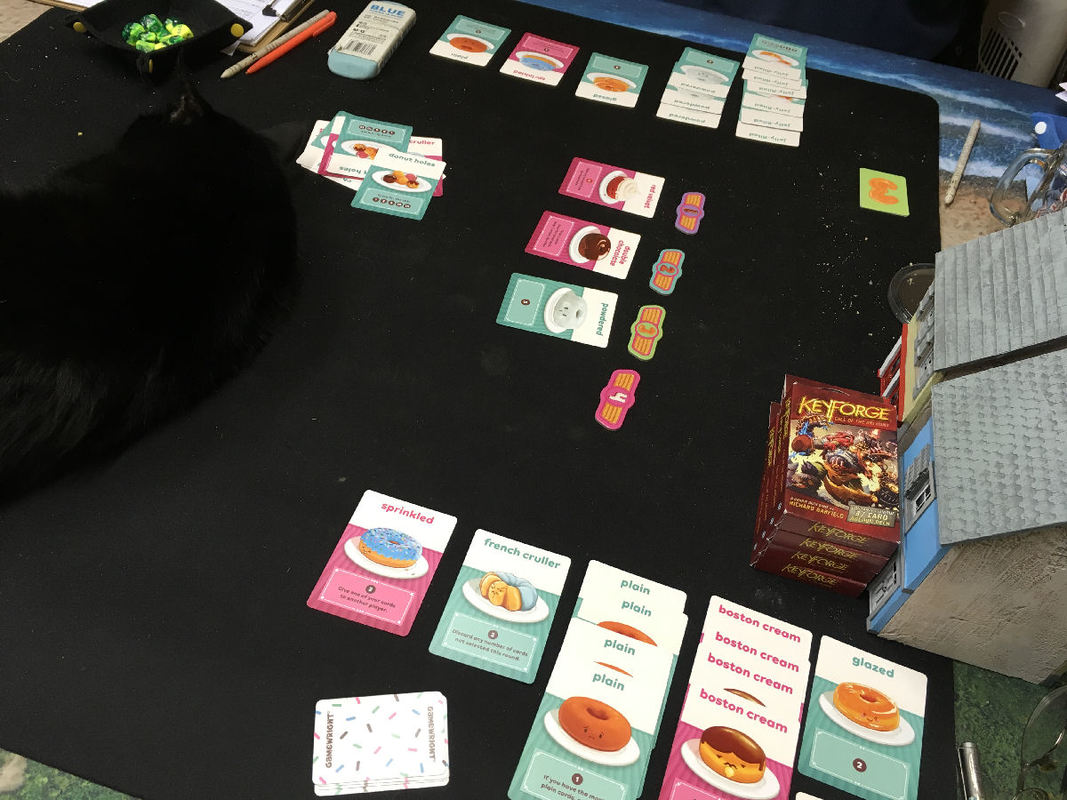 29.12.18
An impromptu Friday night game of Jamaica With Michaela and Karl. I crossed the finish line first but came second on points because Karl had stolen so much of Michaela's wealth (it is a pirate game after all). Felix and Sylvester helped as usual.
29.12.18
A final games night of the year saw a full house of six for a tense Machi Koro outing. Everyone very graciously let me win :)