02.03.19
Last night Michaela was working and Karl was sick so Giro, Mark, Felix and I settled down to a couple of games of Port Royal and a quick finisher of Sleeping Queens. Mark won nothing!
Sylvester joined us for naps in the corner.
10.03.19
After polishing off the second level of the dungeon we're play testing we had a five-player game of Port Royal yesterday which Giro won by a whisker. 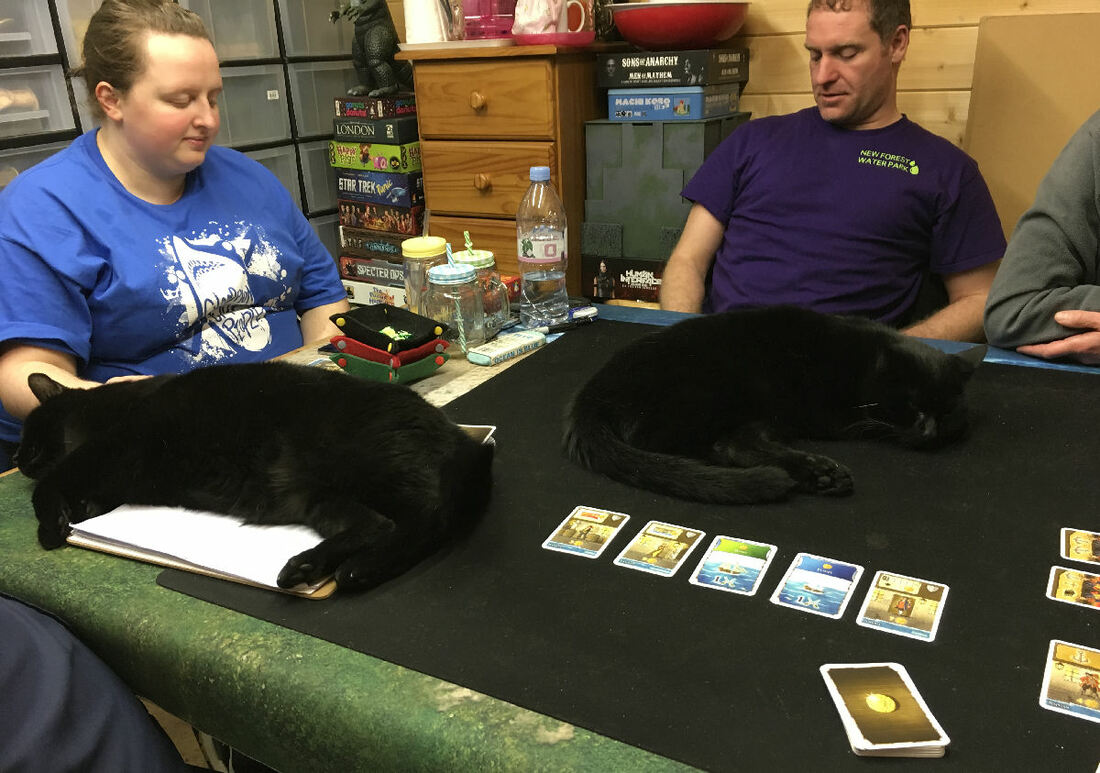 07.04.19
Last night we played Trains, the deckbuilding game of railway building set in Japan. Giro won but the points spread was relatively small so I guess we all did well.
Or maybe we all did badly, none of us managed to buy the 11 point card that the game suggests you include in your early games.
Deck building, trains and Japan, triple win! 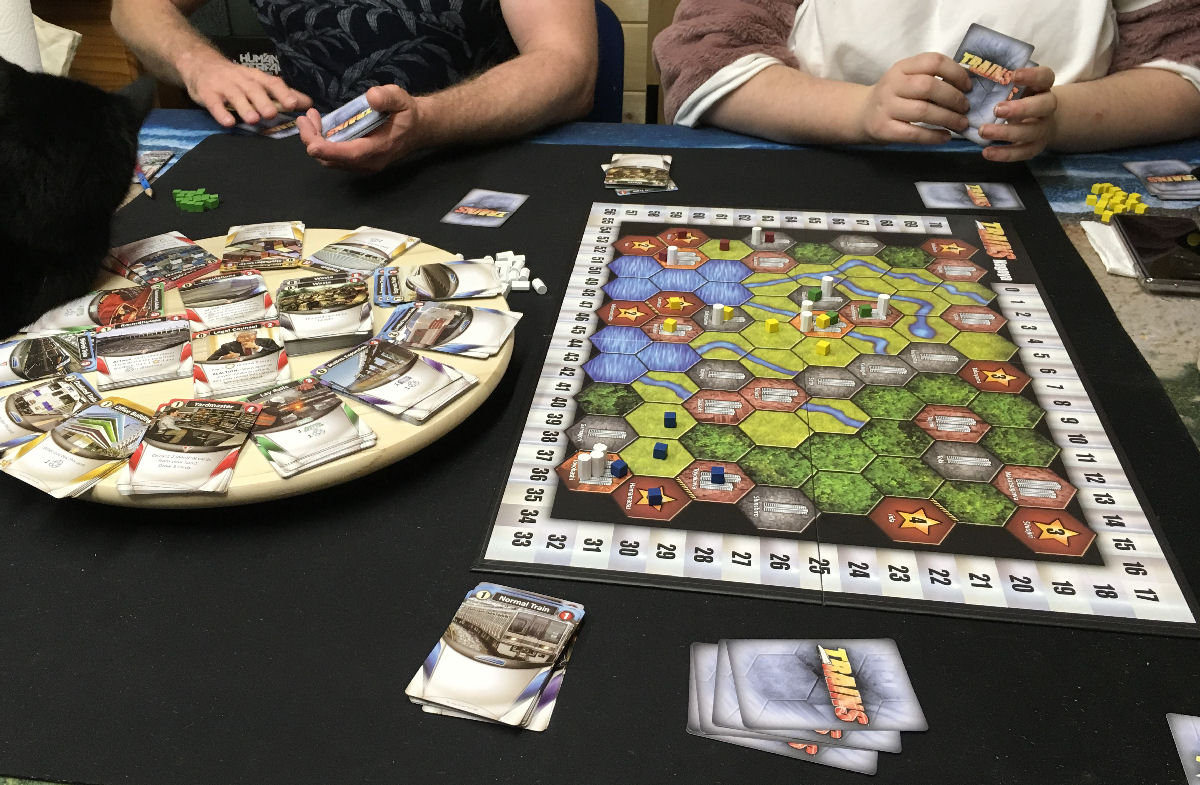 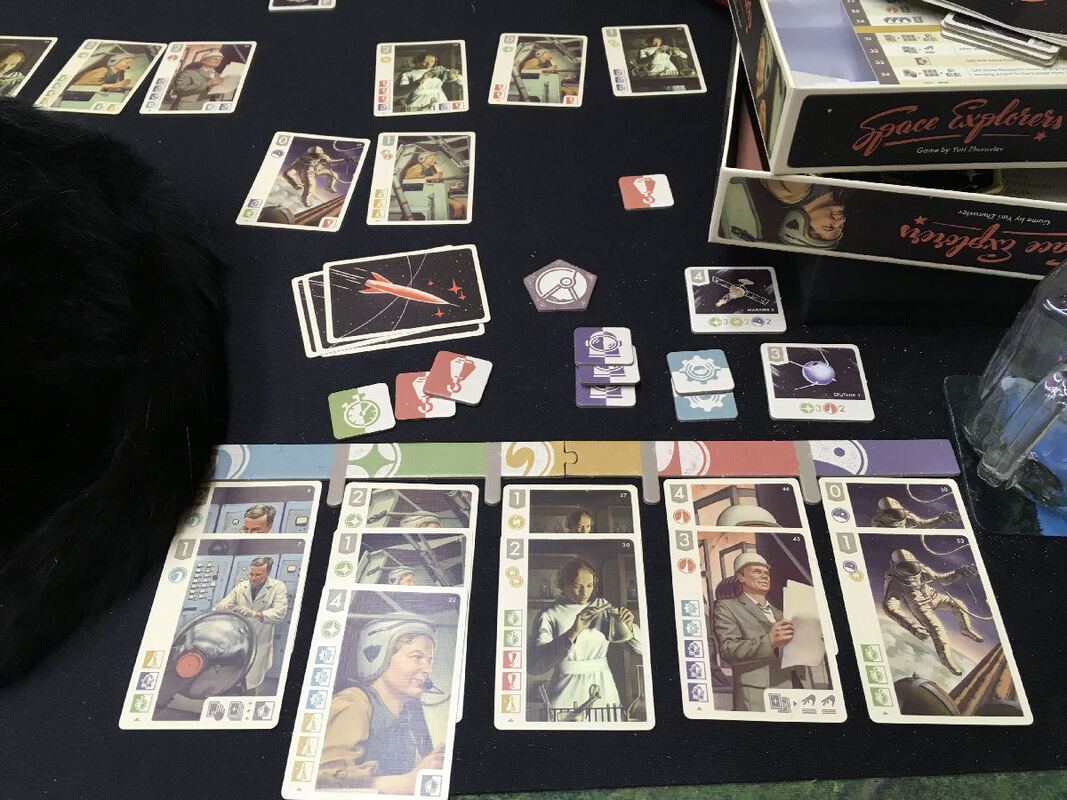 23.06.2019
Last night there were three of us again so we played two games of Machi Koro.
Mark won both with his tax office and an unnatural ability to roll eights.
By the end of the second game, Felix had left in disgust although Sylvester hung around sleeping on a chair. 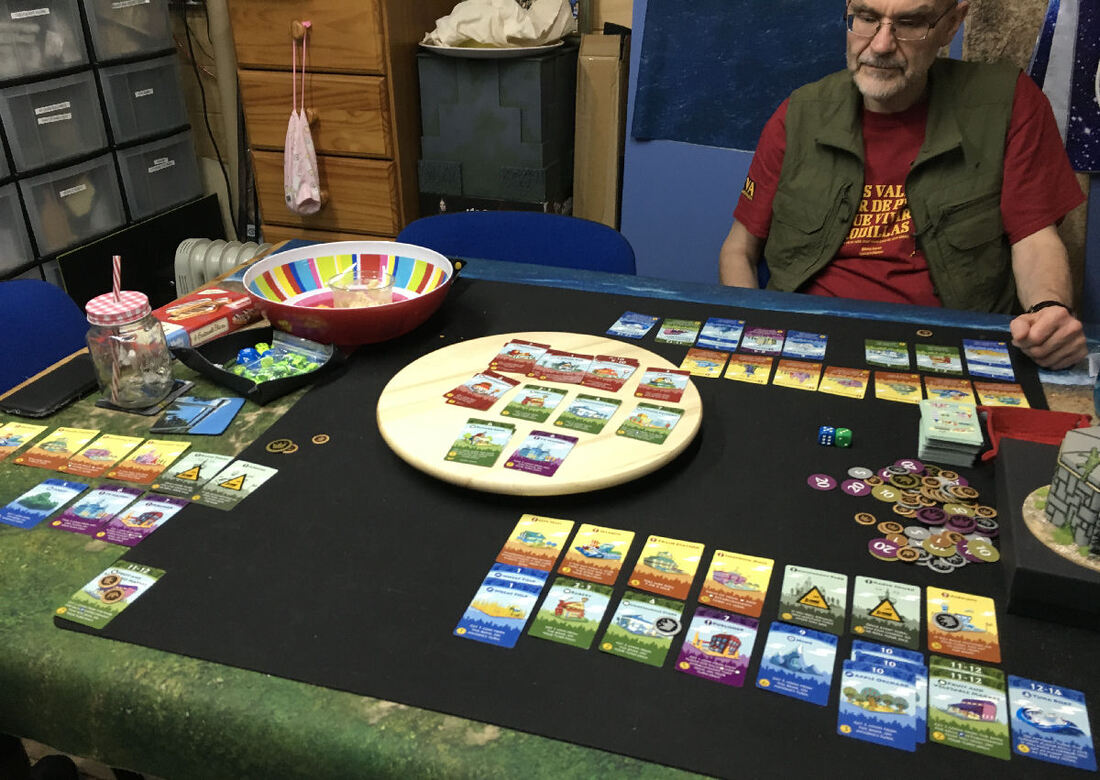 30.06.2019
Last night Michaela was working so we were back to card games instead of role-playing. We had two rounds of Port Royal, neither of which I won.
Felix had wandered off for a couple of days (he's back now) so Sylvester helped out as best he could. 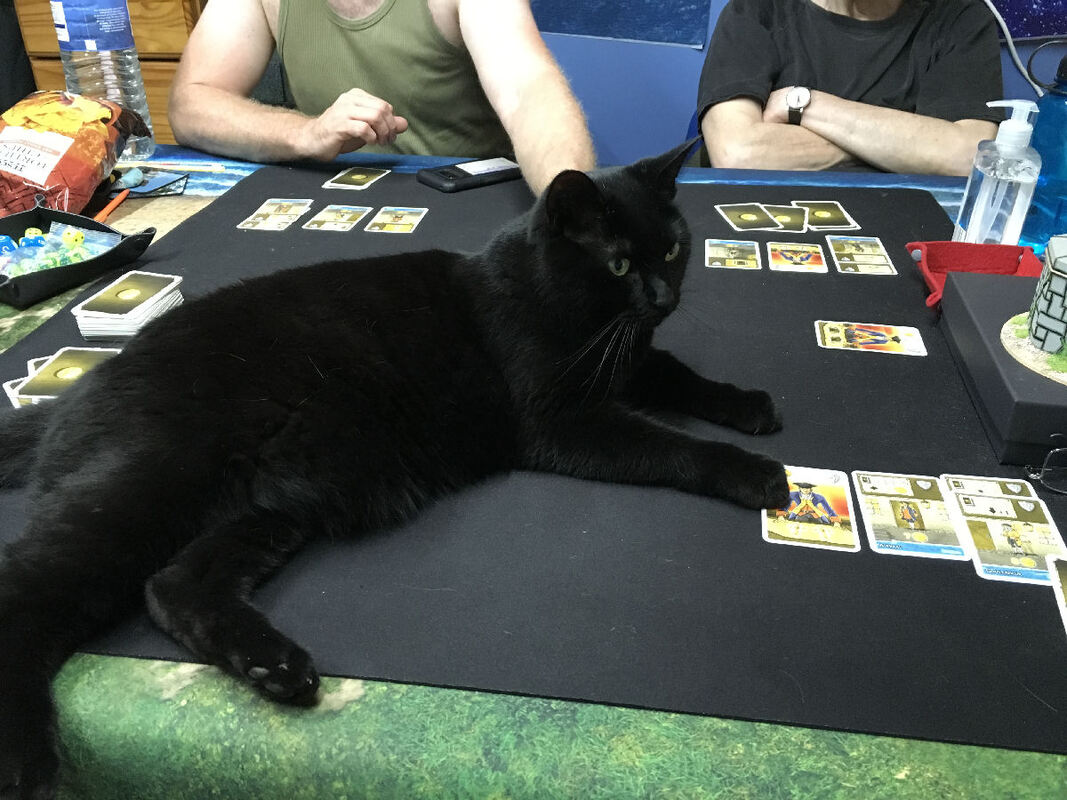 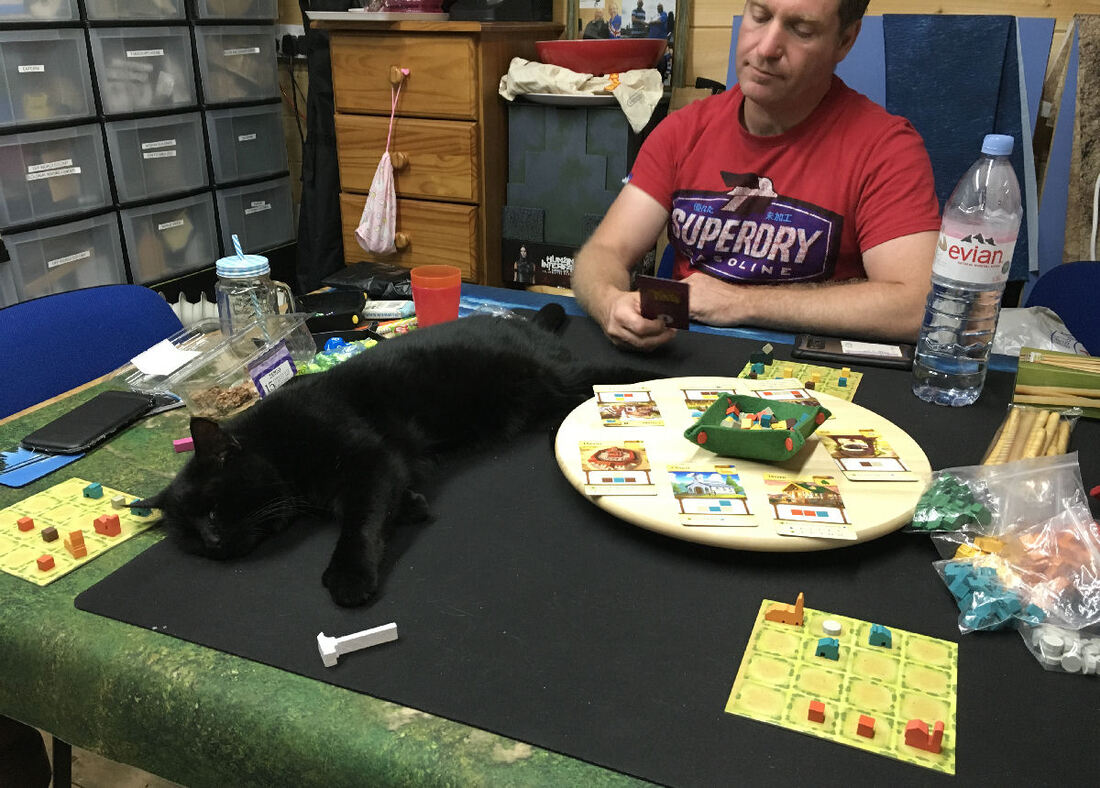 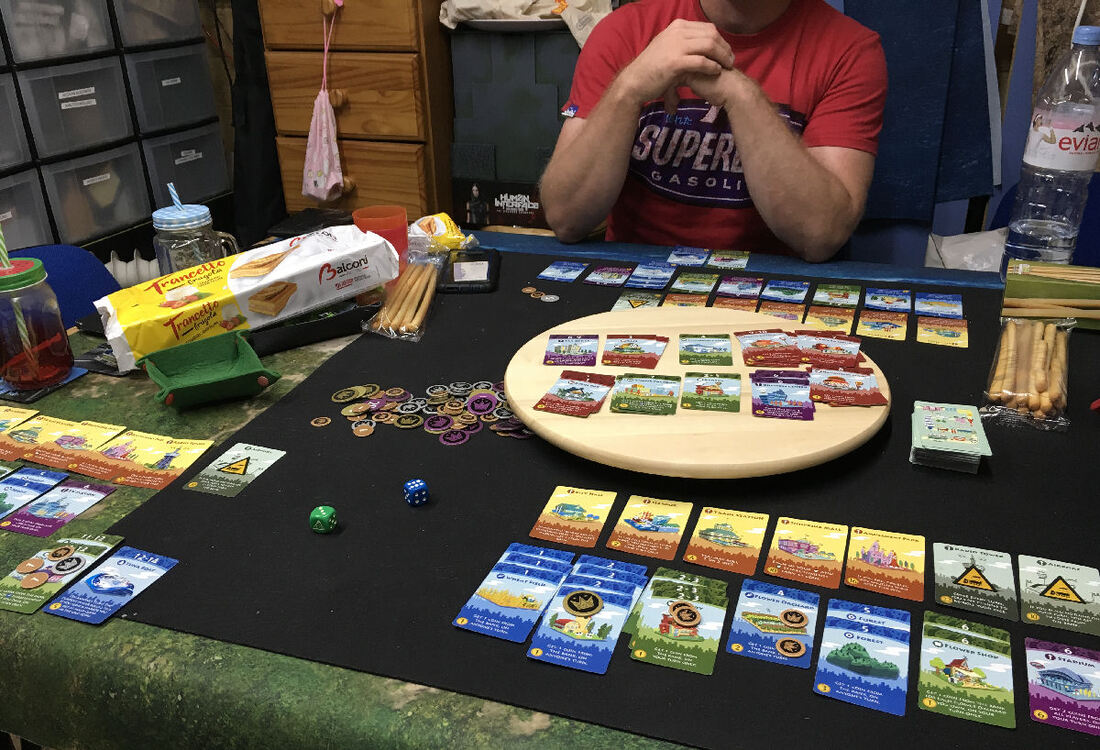 Since Wacky Races was so quick and Karl had to leave after playing (and winning) it we decided to have a three-player game of Villagers to finish off the evening. This game was much better than our first try a couple of weeks ago and we all scored considerably better than before. I won with 265 points but the spread between first and third was only 40 or so points so it was a close game. 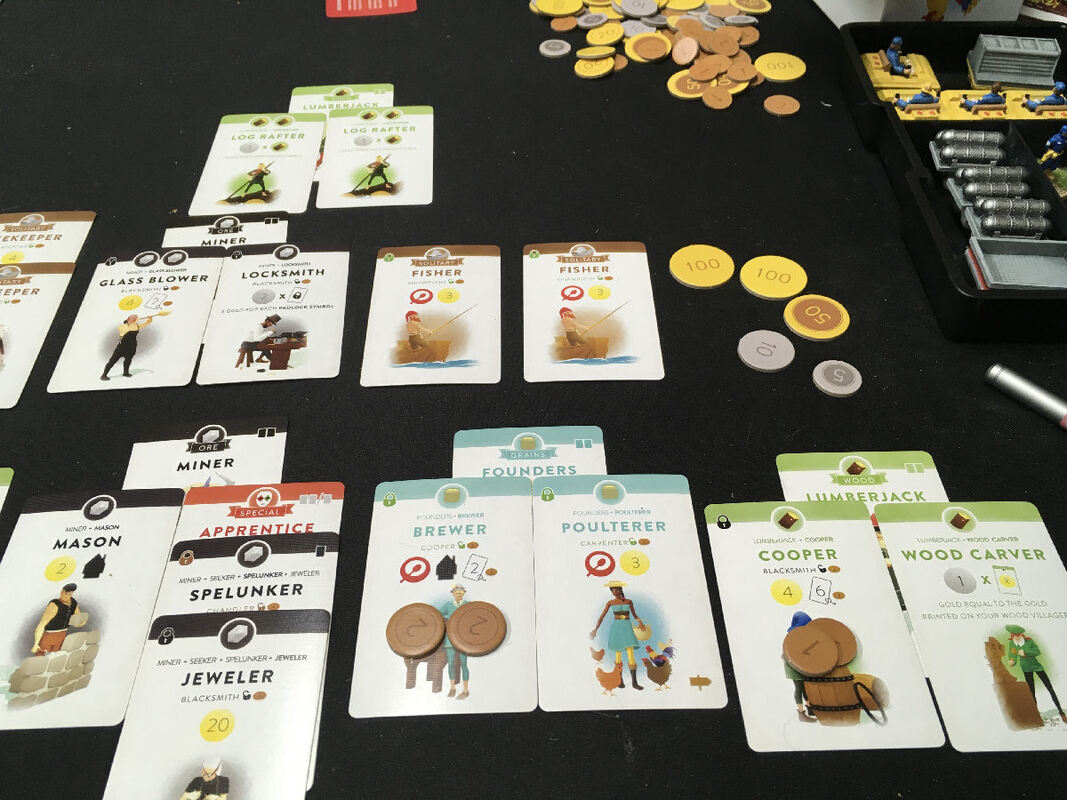 01.09.2019
After a busy day at GamesCon yesterday we broke out Kingmaker in the evening for some nostalgic gameplay set in the Wars of the Roses. Mark started with a much better assortment of nobles than the rest of us (I only had a single minor noble to begin with) and it didn't take long for him to get into a commanding position. Even though I crowned Richard of York king early on he was soon hunted down and executed by Mark's forces leaving Margaret as the rightful Queen of England. Shortly afterwards most of the other potential heirs had tragic accidents and after Mark consolidated his position at the first parliament of the game both Giro and I conceded defeat.
We used to play Kingmaker almost weekly in the early 80s when I was beginning to get interested in board games and it was nice to dust off (literally) this great classic game for another outing. 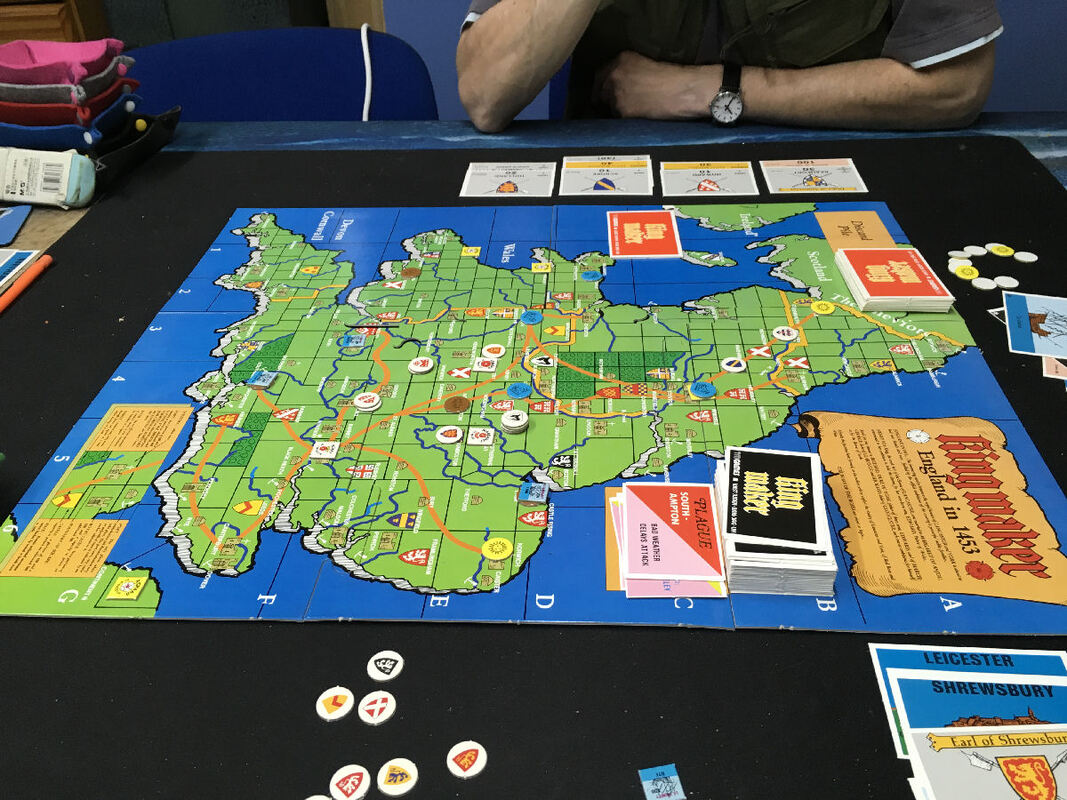 08.09.2019
Last night we played Britannia. We only managed to play to turn 7 due to time constraints and I finished in the lead with the red faction. Good scores from everyone else, it was a close game all the way through. Obviously, the Romans roared ahead to an early lead with their invasion turn but we soon reigned them back in. 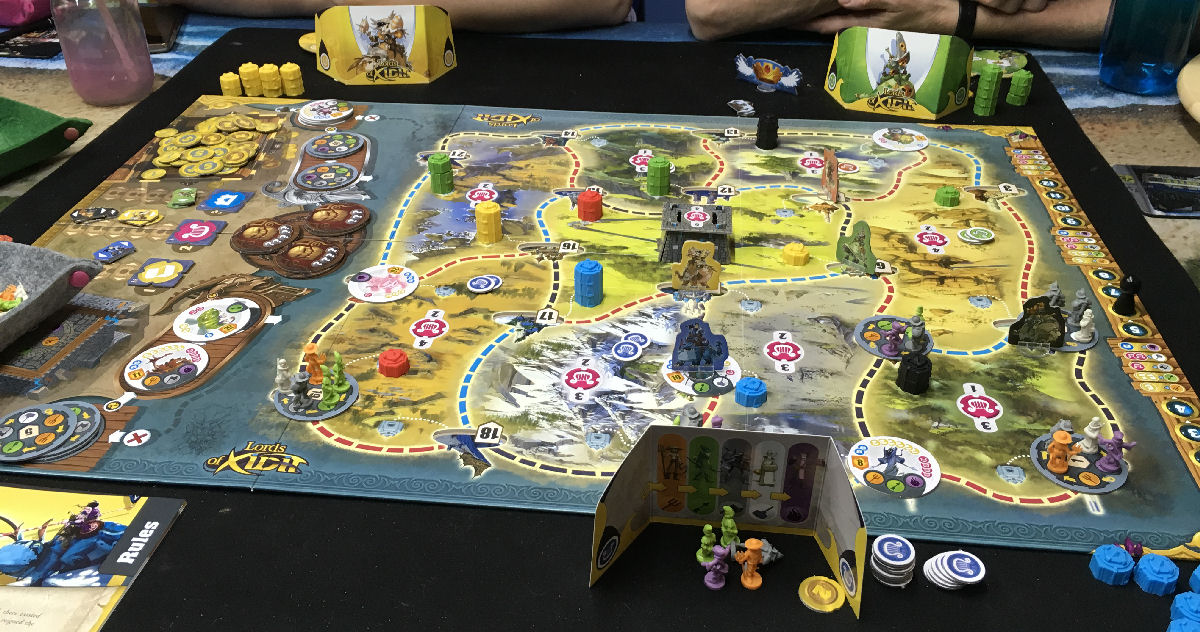 22.09.2019
​SPOILERS: MACHI KORO LEGACY
Last night we played Machi Koro Legacy. We completed five of the ten games in the Legacy campaign and I managed not to win any of them. The changes made to the game are interesting; some of the cards have been changed, new cards added, the way improvements work is different and odd things like the turtle and the yokai have been added for story reasons. So far, so good.
My major concern is the traveller die and its stickers. I'm hoping an engraved one will be revealed later when all the mystery boxes have been opened. Also, it's only a four player game and there's five of us so Karl, who arrived, late missed out. Since I'm clearly crap at this version I'm going to let him use my town for the next session when we'll hopefully complete the campaign.
13.10.2019
Yesterday we finished Machi Koro legacy. It took us three evenings in all to play the 10 games in the legacy campaign.
The games became progressively longer and more complex as time went on. More and more things are added to the game, each of which made player turns longer by involving more calculating. The net effect of this was to increase downtime, slow the play of the game, and complicate the gameplay with no corresponding benefits to either playability or enjoyment.

SPOILERS
I'm going to discuss the specifics of the game so this next part will contain SPOILERS.

Gems. Machi Koro Legacy introduces gems as another form of in-game currency. The gems increase player agency and can be spent to re-roll the dice. This really, really slows down the game as players decide whether it's worth re-rolling a sub optimal roll. This, combined with the visitors (discussed later) involves everyone recalculating their income and future strategy as well. The gems don't add much enjoyment, only complexity.

The visitors. There are three different visitors in the game, each moves around the play area in response to a die roll each turn and exerts different effect on the gameplay. The effects are interesting but unspectacular. If a player chooses to re-roll the visitor die is re-rolled too so their positions and effects are not decided until afterwards. This slows down the game further as no-one can collect visitor influenced income or plan visitor based strategy until the active player has finished deliberating.
More downtime.
The visitors' die itself is a blank die with stickers. It's a shitty component. The stickers are larger than the flat die faces they're to be stuck on to. I was hoping one of the mystery boxes would have a proper engraved visitor die in it, but no such luck.

Money. With no tax office and game mechanics that expect you to amass vast sums to meet victory conditions the economy of Machi Koro Legacy spirals out of control. Unfortunately it doesn't do it evenly and if you're behind the curve you can see you've lost well before the end of the game. It's essentially player elimination.
Most of the money is generated by green cards so the benefits are only for the rolling player, no one else can piggy back. This, combined with the re-rolls from gems and extra goes available from the start of play, means that the game can rapidly become unballanced with no hope of the leader being caught. Whilst this makes for a short game, it doesn't make for an enjoyable one as most of the players are watching the other one essentially playing solo.

Ships. The expedition sub-game lengthens a player's turn exponenionally and adds nothing except handing out more stuff. Handing out more stuff is a hallmark of Machi Koro Legacy. More stuff from visitors, more stuff from sailing, more stuff from extra goes. All this is accumulated so fast and with such little effort, particularly the expedition rewards which are collected mid-calculation and essentially grabbed with no thought, that a player's tableau rapidy expands to the point where keeping track of it is problematical and mistakes are made that need to be remedied later.
The ships are another 'solo' addition where only the active player is involved in the process. More calculations for that player and  more downtime for everyone else,

In conclusion:
Vanilla Machi koro succedes because everyone is interested in the active player's dice roll. Everyone stands to win or lose by it. Play procedes quickly. if your roll isn't great it's only a little while before you get another chance and in the meantime you could still make some money. The choices about what to buy and when to buy it are interesting enough to keep players engaged and the game doesn't out stay its welcome.
Machi Koro Legacy foregoes this simplicity. All-in-all I didn't like Machi koro legacy. The early games are fun and exciting, there are new cards to see and new strattegies to employ and the game play is familiar and fast. But very soon it becomes bogged down in over-complexity and fragmented gameplay.

We switched the new plastic coins with the (now quite worn out) card ones from my basic Machi Koro tin and we'll be back playing the original, quick, fun version very soon. 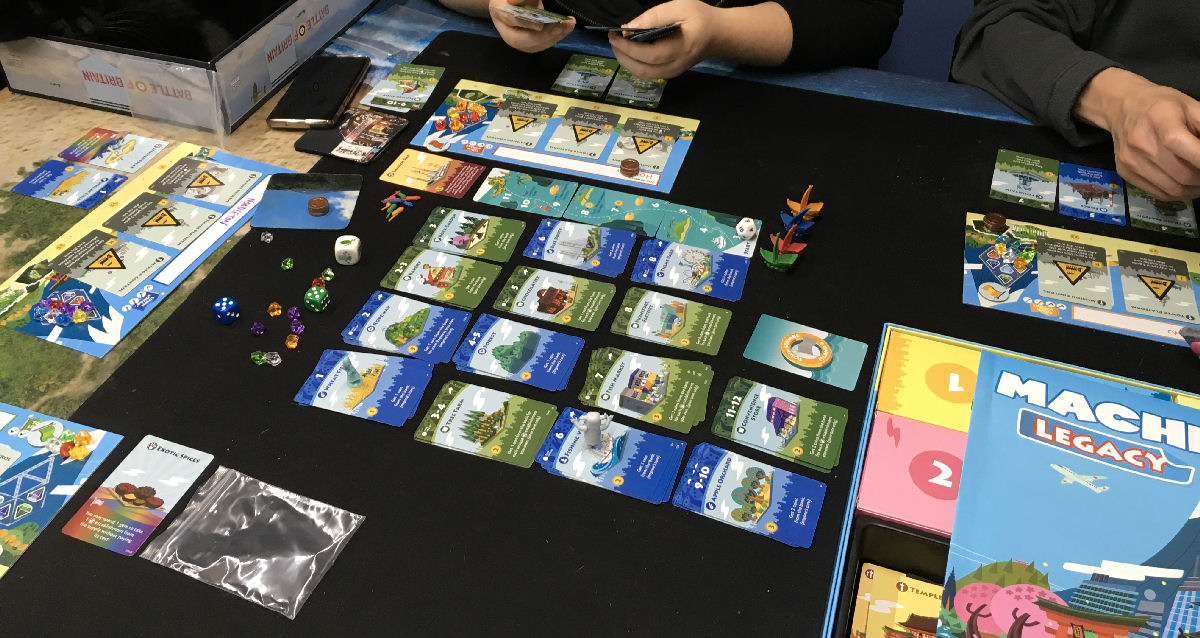 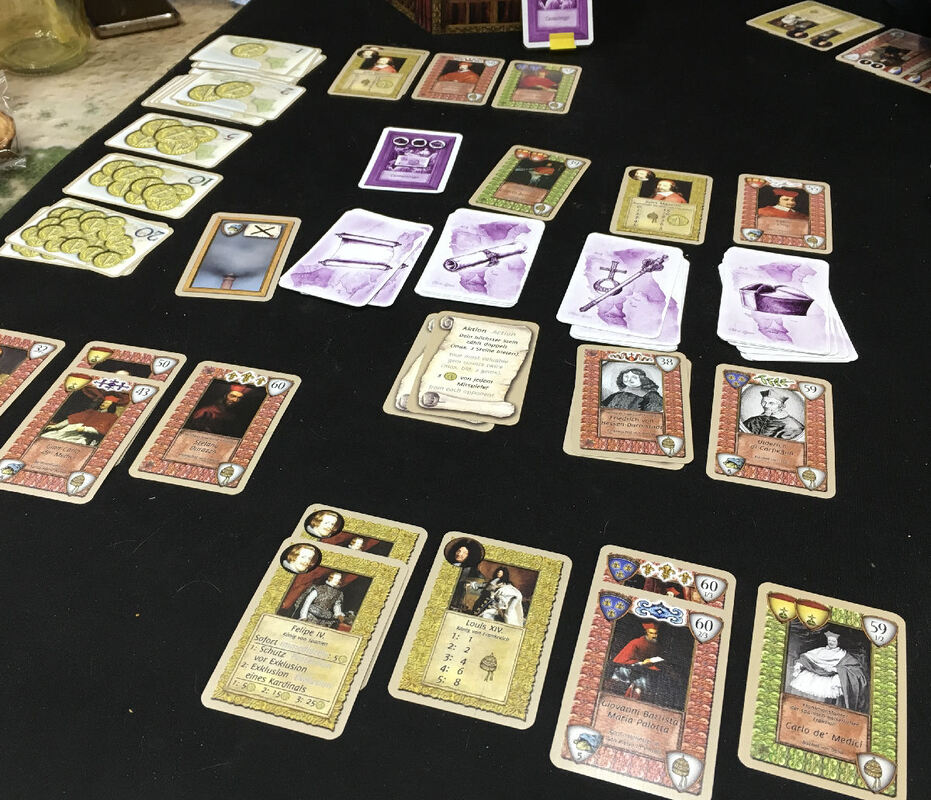 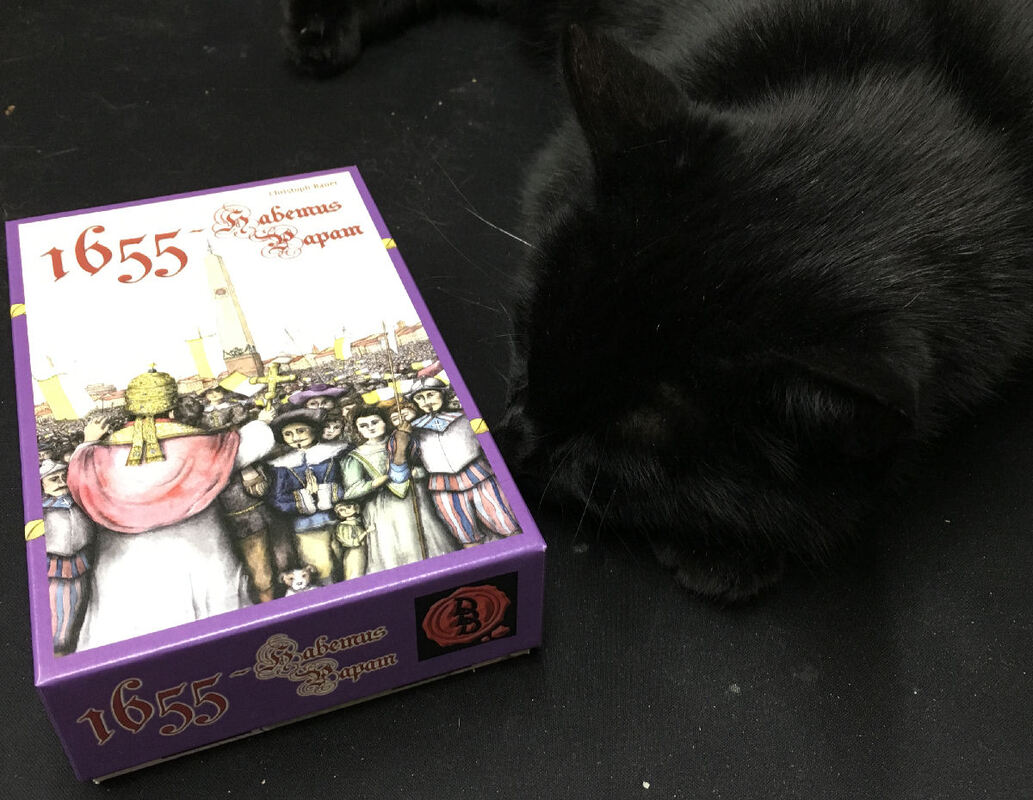 27.10.2019
Last night we played 1830.
This is an old game that I've wanted to own for over 20 years but it's out of print and very expensive to get 2nd hand. I finally got a copy for a reasonable price and it arrived earlier this week. Sadly the arrival coincided with the death of the game's designer, Francis Tresham.
Francis was a great innovator in the boardgames world, inventing not only the incredibly popular family of railway/stock market games that 1830 belongs to but also Civilisation (which pretty much everyone has heard of).
Our playthrough of 1830 was in honour of Francis therefore and turned out to be a very enjoyable game.
We played for over five hours but it didn't feel like it, the game keeps your interest throughout and at the end everyone was surprised by how late it was (even with the 'extra' hour as the clocks changed). Mark won but everyone was very close at the end. I came third.
22.12.2019
Last night Giro, Michala and I played Irish Guage. It was a different game than the last time we played, we spent less on buying shares in the rail companies and built much more track before we called for a dividend payout. We also didn't upgrade as many towns so there were more dividend payouts in total. The resulting scores were much higher for everyone and we exhausted the money supplied with the game well before the end.
The final outcome was a win for me by a single pound over Giro. 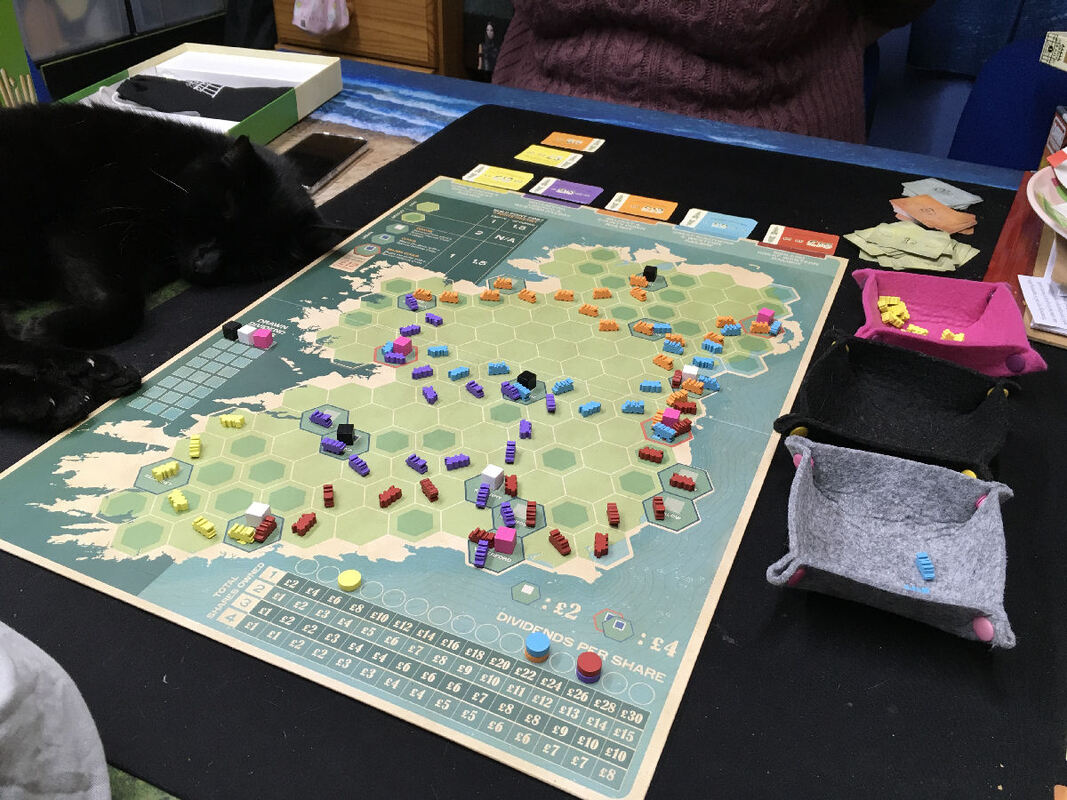 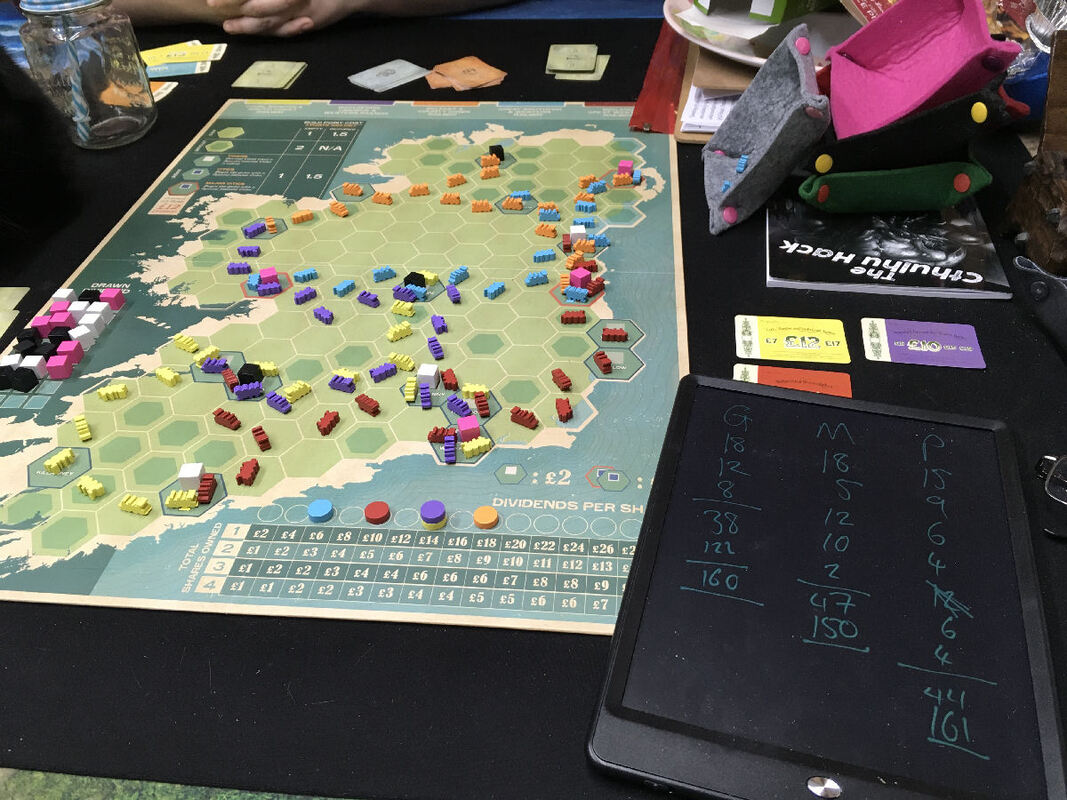 29.12.2019
Last night Giro, Karl and I our final games night of the decade. We played Irish Guage again because Karl hadn't played it before and he won. Somehow fitting.
As we prepare for a new year, and a new decade, of gaming I'm reminded that our group has been together for 21 years now. That's a lot of games nights and a lot of shared enjoyment. 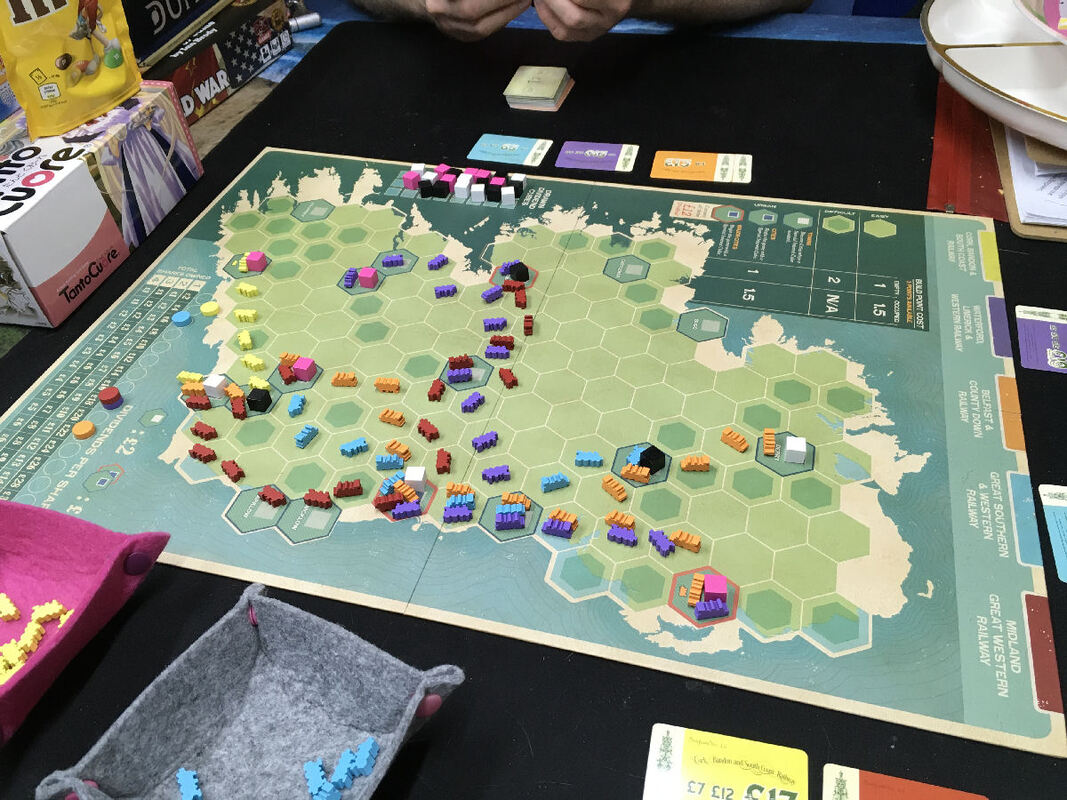 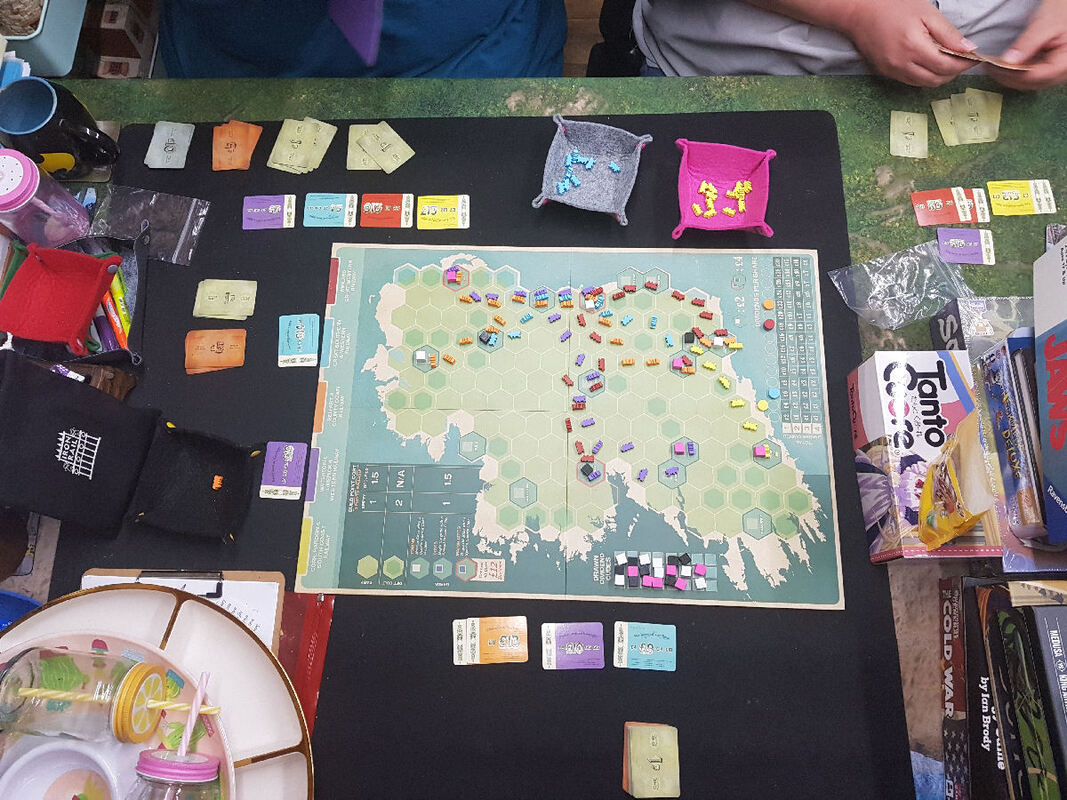 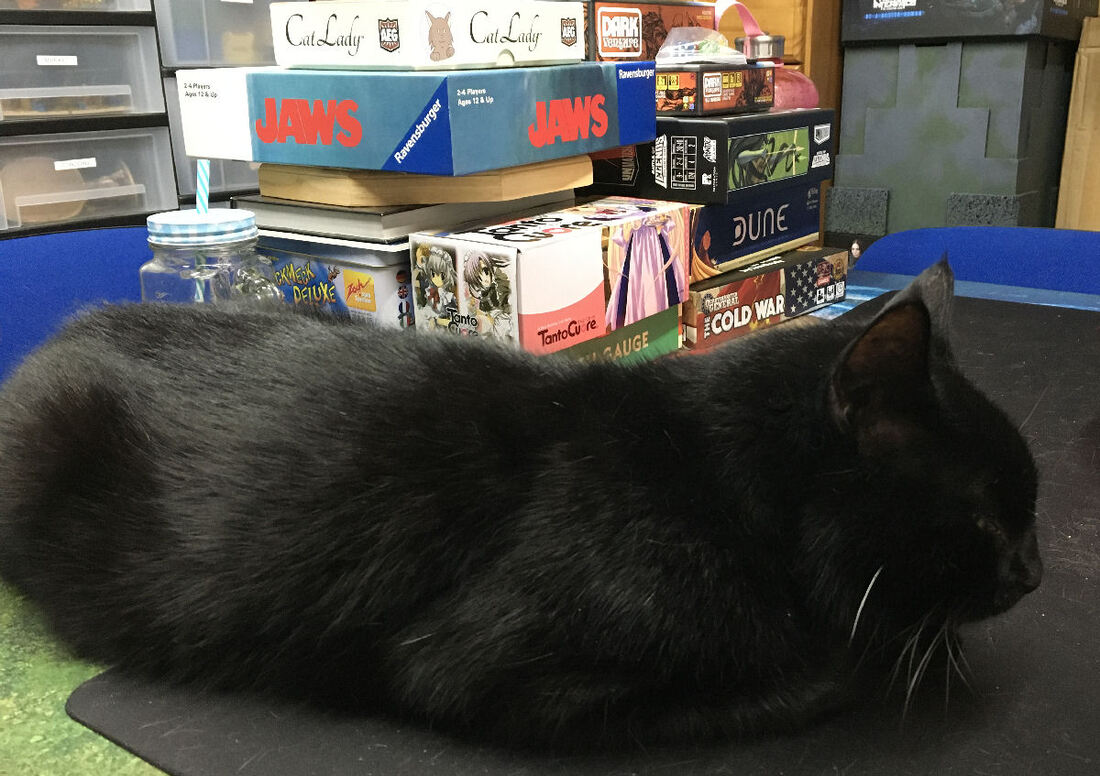